This attractive route provides an off-road, circular route of approximately seven miles, much of which follows the Weaver Navigation.

UPDATES REGARDING THE CLOSURE

(Autumn 2020) The Aston Ring along Pickering’s Cut near the railway viaduct was due to be opened this summer with the worst areas fenced off but this has now been delayed by the Council. An alternative solution is in the process of being agreed with the local Badger Group and Natural England. Although officially this route is closed, there are no signs and some riders are still using the route either by dismounting and leading using the mounting blocks or by by-passing this section through a couple of bridle gates via the Woodland Trust land. Clearly anyone does this at their own risk and there is also some badger activity in the adjacent field. This is extremely frustrating and we are continuing to lobby rights of way.

Please use the Countryside Code

It is recommended that you carry a mobile phone and wear high visibility clothing as this route is quite isolated and it is better to avoid riding it alone. 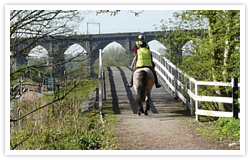 Wildlife – Buzzards can frequently be seen overhead and falcons are said to nest on the railway viaduct. Reed warblers, swans and mallards nest in the reed beds along the river banks.

Acton Swing Bridge – This was constructed in the 1930s when the A49 was realigned to replace an old stone bridge that can still be seen just upstream and a former swing bridge.

Dutton Locks – These were built in late 1870s and the lock keeper’s office and houses date from this period. There used to be a horse bridge across here and the pivot can be seen.

Lower Dutton Horse Bridge –This was originally built in 1919
but was completely re-built in the nineties and is listed for its historic importance. It is constructed of curved, laminated greenheart timber and crosses the old course of the Weaver.

Dutton Viaduct – This was built in the 1830s and the stone piers are built on timber piles and is listed for its historic importance. The main west coast line crosses this and it is said to sway when a train passes! 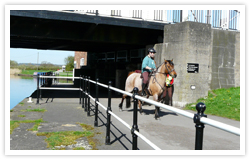 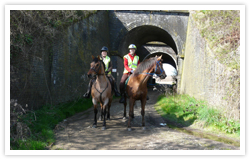